X
This site uses cookies to provide and improve your shopping experience. If you want to benefit from this improved service, please opt-in.
More Info
Accept Cookies
Hassle Free Returns - check out our Returns Policy
Free Delivery On Orders Over £85 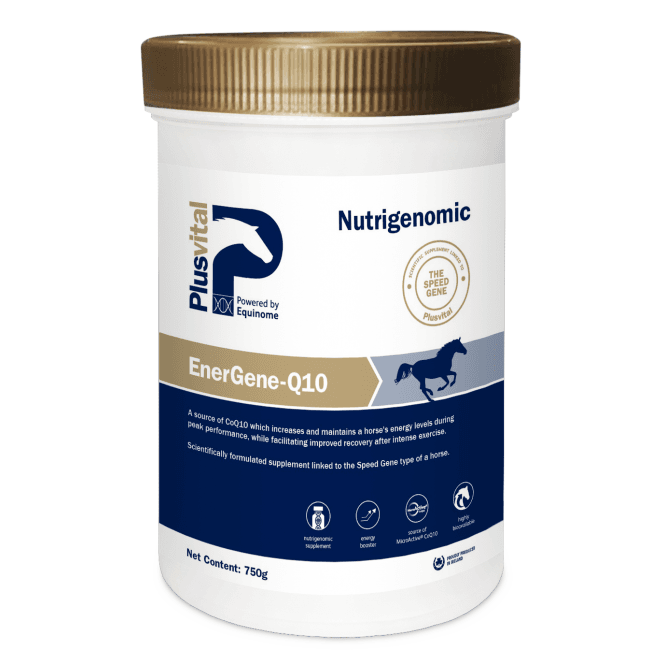 EnerGene-Q10 has been scientifically formulated to contain a highly bioavailable form of the mitochondrial Co-enzyme Q10 (CoQ10) to support more efficient energy production within a horse’s muscles.

The formulation also contains antioxidant properties to aid in delaying fatigue and enhancing recovery following intense exercise. This specifically tailored supplement increases and maintains the energy levels of horses during exercise, with particular benefit for T:T type horses as categorised by our Speed Gene Test. In a published scientific study*, it was found that T:T horses (i.e. suited to exercise requiring stamina) had significantly lower cellular levels of CoQ10 than C:C horses (i.e. suited to sprint exercise).

However, field trials have shown that using EnerGene-Q10 results in increased levels of CoQ10 in muscle cells, which is particularly important for horses requiring increased aerobic energy production. Benefits from an increase in CoQ10 include:

Add 25g per day to feed. A 25g measure is provided. Each 750g contains 30 doses at 25g per day. EnerGene-Q10 may also be administered orally via a dosing syringe by dissolving 25g of the product in water.

Please contact us for a quote for our Same Day Delivery Service or International Shipping Rates.

Click and Collect is also available from our warehouse in Birdlip, Gloucester - please contact us for this option.

All orders subject to stock availability and courier capability. Please note our office hours are 7am-5pm Monday to Friday.

**DUE TO COVID19 WE ARE UNABLE TO GUARANTEE OUR NEXT DAY DELIVERY, IT MAY TAKE 2-3 DAYS, AND IF DESPATCHED WE CANNOT CREDIT ANY CARRIAGE CHARGES**